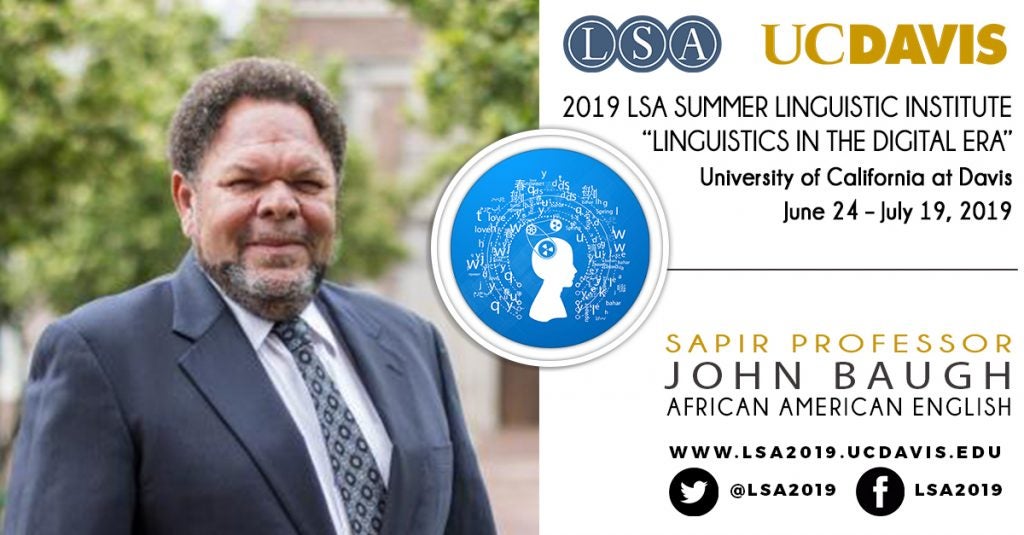 John Baugh of Washington University at St. Louis is the recipient of the prestigious Edward Sapir Professorship. Dr. Baugh is headed to UC Davis to teach the African American English course at the 2019 LSA Institute.

I received an M.A. and Ph.D. in Linguistics from the University of Pennsylvania in 1976 and 1979 respectively. William Labov was my dissertation supervisor, and my dissertation committee included Dell Hymes, Erving Goffman, and John Fought. I completed a four-year longitudinal study of adult style shifting among African Americans, which resulted in the publication of my first book, Black Street Speech: Its History, Structure, and Survival; 1979, University of Texas Press.

I began teaching in 1975 as a lecturer in Black Studies and Linguistics at Swarthmore College, and I continued teaching there until 1979 at which time I joined the faculty in the linguistics department at the University of Texas at Austin. I was promoted to the rank of Associate Professor in 1984 after spending a year at the Center for Applied Linguistics as a Research Fellow with support from the Ford Foundation. In 1987 I was invited to be a fellow at the Center for Advanced Studies in the Behavioral Sciences, and I joined the faculty at Stanford University as Professor of Education and Linguistics in 1990. In 2005 I became Professor Emeritus at Stanford upon accepting my current appointment as the Margaret Bush Wilson Professor in Arts and Sciences at Washington University in St. Louis. After serving one term as Director of the Program in African and African American Studies, I returned to a regular faculty appointment with multiple departmental appointments in Psychological and Brain Sciences, Anthropology, Education, English, Linguistics, African and African American Studies, American Culture Studies, Philosophy-Neuroscience-Psychology, and Urban Studies.

My most recent book is titled, Linguistics in Pursuit of Justice (Cambridge University Press, 2018), and the content explores various ways in which linguistic science can be used for legal, social, and policy purposes to promote equality worldwide.

I first joined the LSA in 1976; I am presently a lifetime member and an LSA Fellow.

Can you tell us about the course you are teaching in the Institute?

For the past four years, I have been working more frequently as an expert witness in legal cases, including criminal trials (e.g. Capital Murder Trials), and civil cases (e.g. employment and housing discrimination cases). My newest project is under contract with the United States Department of Justice, where I am preparing protocols for the DOJ regarding accurate and reliable voice identification that will be used for legal purposes.

I am a sailor. I have my captain’s license and recently spent a week sailing on a catamaran in Belize, exploring several different cays, and significant portions of their national reef, which is the second largest in the world. 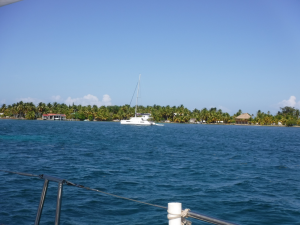 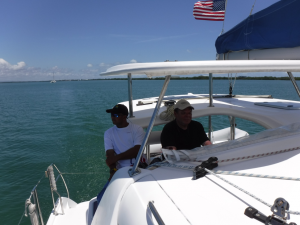 Washington University in St. Louis is on a semester system.

I would prefer to teach once a week in a three-hour block.

I enjoy UC Davis very much, and have visited the campus frequently during the past 20 years. Some of the UC Davis faculty are former students from Stanford and The University of Texas at Austin, and it has been exciting for me to observe their professional growth and stature as distinguished scholars, all. Also, UC Davis has sent outstanding post-doctoral fellows to Washington University, and their teaching has enhanced our linguistics program. Indeed, their teaching has been vital to our students, with emphasis on syntax, computational linguistics, and historical linguistics. Their training is outstanding as is their teaching.

Future career options for graduate students in linguistics include and exceed traditional academic appointments. Career paths for professional linguists have expanded greatly since I was a graduate student during the 1970’s. Employment with Microsoft, Google, Facebook, the United Nations, The United States Department of State, The United States Census Bureau and a host of Foundations and other for-profit and non-profit organizations has increased and will continue to do so.