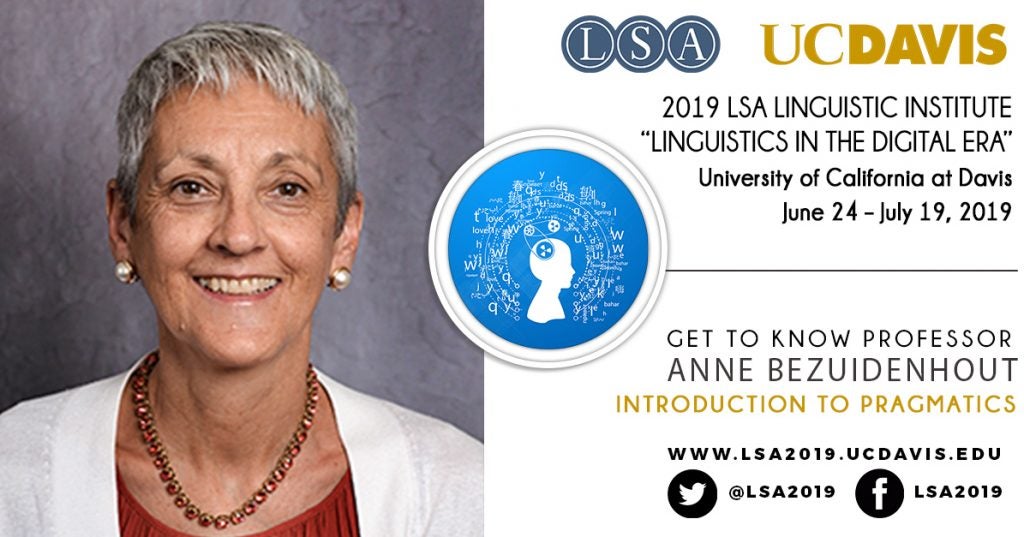 Anne Bezuidenhout (University of South Carolina) is teaching the Introduction to Pragmatics course at the #lingstitute2019. The class starts with a discussion of several general frameworks (neo-Gricean “Manichean” and Relevance Theory) followed by a closer look into various categories of implicitly conveyed contents. Anne enjoys watching Korean TV Dramas followed by guiltily going for long walks to make up for spending too much time in front of a screen. We suggest you continue reading so you don’t miss out on Anne’s fun interview and amazing advice.

I am a philosopher by training (my Ph.D. from the University of Michigan was in philosophy). My area of specialization is the philosophy of language. I joined the philosophy faculty at the University of South Carolina in 1990 and a couple of years after that, I became a core member of the USC Linguistics Program. This was the best thing that ever happened to me in terms of my academic career. I found colleagues and graduate students who were interested in the topics I was working on and over the years these people have provided me with a rich education in linguistics from many different perspectives – one of the strengths of the USC Linguistics Program is the range of different sub-fields that are represented by our faculty.

I became a member in 1999, according to the LSA records. Lucky for me that LSA keeps such records, because I probably would have had a hard time tracking down the year just by trying to find membership fee payment receipts!

I am teaching the Introduction to Pragmatics course. We will begin by looking at two very general frameworks for thinking systematically about how we are able to use language to communicate messages whose content often far outstrips the literal meanings of the words used to convey those messages. In particular, we will look at Larry Horn’s neo-Gricean “Manichean” theory and Dan Sperber & Deirdre Wilson’s Relevance Theory. We will then zoom in and look at various categories of implicitly conveyed contents. The focus in this part of the course will be on informative presuppositions, contextual enrichments, and generalized conversational (especially scalar) implicatures. We will ask how these are accommodated within these frameworks and the extent to which additional tools from formal pragmatics are needed to provide adequate explanations.

Two projects are occupying me currently. One is a psycholinguistic investigation of appositive relative clauses that looks at whether, and if so under what conditions, the contents of appositive relative clauses can become foregrounded. I am working on this with my colleague Amit Almor. I am also interested in understanding what is involved when two (or more) people refer jointly to a thing or a category of things. More particularly, I am looking at the use of general extenders (expressions such as ‘and that sort of stuff’ and ‘or something’) in face-to-face conversation. I hypothesize that these are invitations to the addressee to jointly construct a “locally contingent” category of things. Such categories are one-off and may have no application outside the particular conversational exchanges that generated them.

Watching Korean TV dramas, and then guiltily going for long walks to make up for spending too much time in front of a screen.

I have never attended an LSA Summer Institute but have heard a lot of really positive things over the years from my colleagues who have taught at institutes and in some cases even attended institutes as students. I am expecting the time to be a very intense and fruitful one and I know I will learn a lot. I certainly hope that I can contribute a little bit to what I know will be a rich experience for those in attendance.

Ice-cream
Do robot versions count? If so, robodog for sure
I have no basis for comparison, never having taught at an institution using the quarter system

Even if you are a doctoral student whose goal is a career as a college professor, don’t let that prevent you from taking opportunities (including ones offered outside your own program or department) to acquire or hone skills that could be useful outside of academia. If you do end up in academia, the fact that you have studied something from a perspective outside your own discipline can make you a valuable collaborator with researchers from other disciplines.