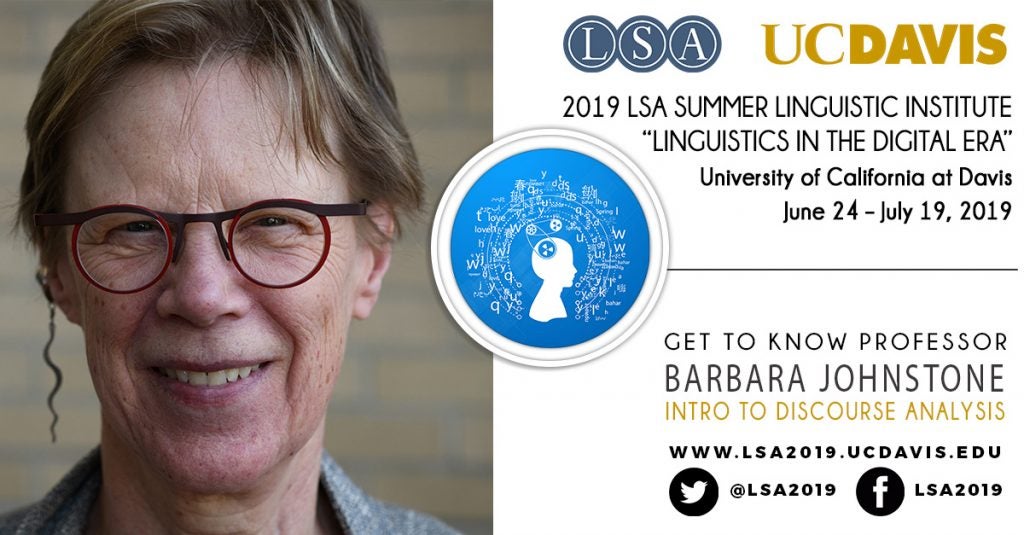 Barbara Johnstone (Carnegie Mellon University) will teach the Discourse Analysis course at the 2019 LSA Summer Linguistic Institute at UC Davis. As much as Professor Johnstone needs no further introduction, this must-read interview lets you in on her Institute course, competitive dog training, and everything she looks forward to about Davis.

I got interested in linguistics as an advanced student of French in high school. I read Benjamin Lee Whorf’s essays and an old popular-audience introductory textbook from my father’s library, and when I got to Yale, I took Introduction to Linguistics my first semester. I supplemented the courses taught in the Department of Linguistics with courses in the philosophy and psychology of language, anthropological linguistics, and German, Modern Greek, and Arabic. After college, I worked as an ESL teacher in Germany for two years, then went to the University of Michigan, where I planned to get an MA in TESOL. There I discovered A. L. (“Pete”) Becker’s work on language, culture, and discourse and decided to stay on for my Ph.D. My dissertation was about the structure of Arabic expository prose. I was one of the first handful of linguists to call ourselves discourse analysts. Subsequent jobs (at Indiana University/Purdue University, Fort Wayne, Georgetown, Texas A&M, and Carnegie Mellon) were mostly in English departments, so I switched my focus to varieties of English as they related to place and identity. This took me deep into variationist sociolinguistics and semiotic theory from linguistic anthropology. In 2018 I retired from Carnegie Mellon, but I am still involved in the linguistics profession as a scholar, reviewer, and occasional teacher.

I have been a sporadic member of the LSA since the early 1980s. I recently re-joined when I realized that the LSA is a lot more open to the kinds of work I do than it once was.

Discourse Analysis is a course I have developed over many years. It is based on a course taught by A.L. Becker that I took, then TA’d for, in graduate school, a course in which Becker took us through multiple sources of constraint and creativity in discourse, systematically looking at many different ways of accounting for why a particular utterance or text takes the shape it does. The book I wrote for this course has been adopted all over the world and is now in its third edition. We will be using it at the Institute.

For the past couple of decades, I have been studying the history of and reasons for the close relationship between the distinctive dialect of southwestern PA known as “Pittsburghese” and what it means to be a Pittsburgher or live in Pittsburgh. I published an Oxford University Press book about the social history of Pittsburghese in 2013, but I continue to track and write about how the indexical meanings of Pittsburgh speech arise and evolve.

Two favorites: knitting (I especially like sweaters) and working with my dog. With a previous dog, I learned to do Rally Obedience well enough that one year we were ranked 8th in the US. My current dog and I are working our way up to competition level.

Hmm, hard to say. I grew up in an academic family and was always pointed in that direction. Maybe a designer?

Revisiting the lovely campus and being close enough to visit my nephews in the Bay Area.

I am extremely glad I took courses in rhetoric (in the department of Communications) as a grad student. I wouldn’t have had the career I did without them. Some very interesting work about language is being done in departments of computer science, language technologies, and anthropology. Explore around!