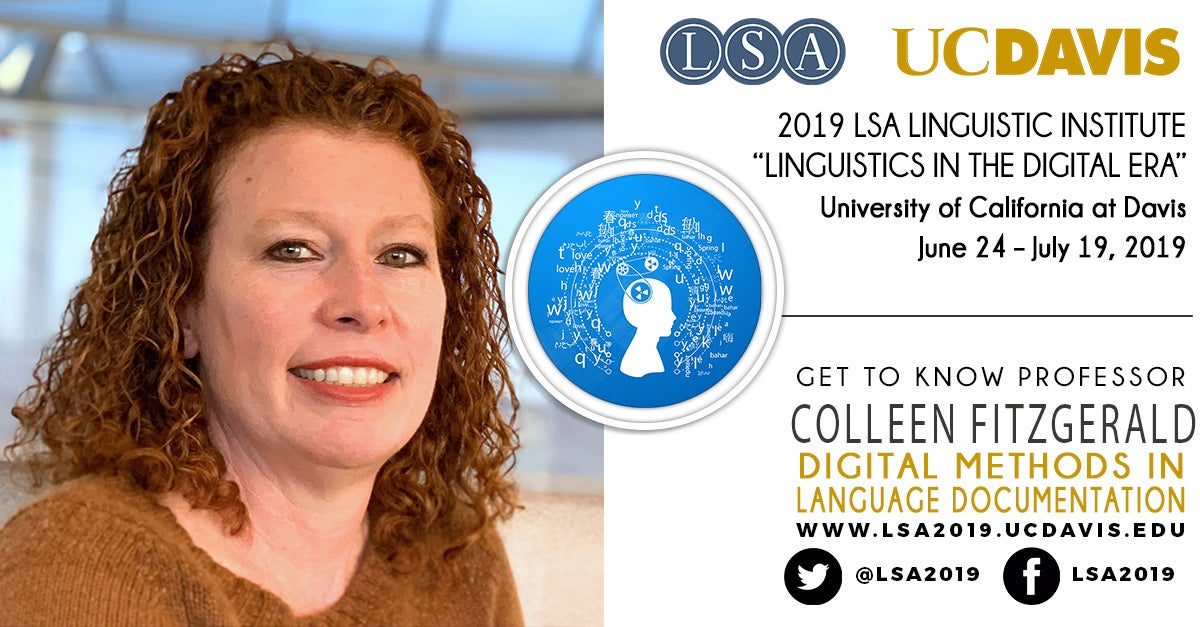 Colleen Fitzgerald (University of Texas, Arlington) doesn’t just use technology for language documentation, she is also an avid Instagrammer! In this interview, she talks about everything from her passion for Native American languages to her love for food and travel. Continue reading to learn more about both her and her #lingstitute2019 course, Digital Methods in Language Documentation.

My research investigates both the phonology of Native American languages, and language documentation and revitalization, with frequent points of intersection between these two themes. In a larger context, this work involves participatory research methods; service-learning; broadening participation in the social sciences; and science communication. I’m currently collaborating on Chickasaw, a Native American language, with Joshua Hinson of the Chickasaw Language Revitalization Program. In July, I will finish a four-year stint as at the National Science Foundation, where I have been the Program Director for the Documenting Endangered Languages partnership, a joint initiative between NSF and the National Endowment for the Humanities. I’ve been doing that while on leave from the University of Texas at Arlington, where I’m a professor and direct the Native American Languages Lab.

My guess is that it was 1991, when I started the graduate program at the University of Arizona.  Arizona linguistics did a great job of encouraging the professional development of their grad students. They encouraged us to join the LSA and to submit abstracts to the conference.  I attended my first LSA meeting in my second year, when it was held in Los Angeles.  I gave a talk at one of the sister societies (Society for Pidgin and Creole Linguistics) and that was my start at seeing the LSA in action for these big annual meetings every January.

I’m co-teaching a class on digital methods in language documentation with Andrea Berez-Kroeker. We’ll be covering audio and video, as well as software like ELAN and FLEx.  Andrea is handling the first half of the course and then I’ll teach for the second half. I am handling the section on FLEx (Fieldworks Language Explorer), which is tool for lexical and text databasing. It’s software I’ve taught at training workshops elsewhere, including for audiences of Native American community members working on language reclamation. In addition, my portion also brings in indigenous methodologies and perspectives on digital tools, ethical and ownership kinds of issues that should be considered as communities and linguists are co-designing language documentation projects. The course will also expose students to digital documentation tools developed by or for indigenous communities, like Miromaa and Murkurtu. Ethical and related considerations seem appropriate given the intended and unintended usage of digital data of any kind, not just language documentation. But it is perhaps especially important in 2019, which the United Nations has designated as the International Year of Indigenous Languages. One of the goals of IYIL is the “creation of favorable conditions for knowledge-sharing and dissemination of good practices with regards to indigenous languages.” Andrea and I both hope that the “Digital Methods in Language Documentation” course will help in that mission. People can learn more about IYIL here: https://en.iyil2019.org/.

I mentioned our Chickasaw collaboration above, which has been focused on documenting narratives and conversation from the 50 or fewer speakers of this Oklahoma indigenous language from the Muskogean family.  I’ve also been collaborating with Ewa Czaykowska-Higgins of the University of Victoria on the acquisition of pronunciation for indigenous languages in language revitalization contexts.  Many communities have a number of members who no longer speak their ancestral language but are currently learning it. We have co-taught a course on “Teaching Pronunciation for Indigenous Languages” at CoLang (the Institute on Collaborative Language Research) in both 2016 and 2018, and this work is coming out of that. I have some other projects on Tohono O’odham, a language spoken in Arizona and northern Mexico, including a forthcoming paper on second position effects in the language.

I’m excited about exploring the campus and the city.

Last summer, I was at a language summit for Native American teachers of pre-K children, learning their ancestral language.  One of the speakers asked people at each table about the role language plays in their lives. A young woman at my table instantly said, “What does our language mean to me? Sovereignty.” There’s a similar line in a play by Cherokee playwright Mary Kathryn Nagle, where John Ridge says, “Sovereignty is when I speak my language.” I would recommend that graduate students, and really, all of us, consider how important it is to honor and respect the powerful role of language in communities.