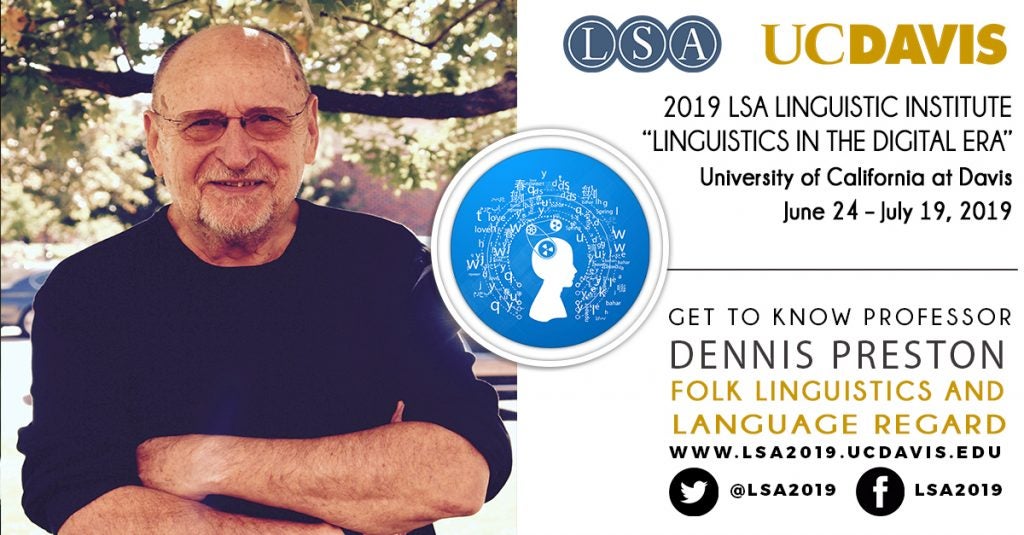 While many of us are aware that Dennis Preston (Oklahoma State) has contributed greatly to the field of sociolinguistics and dialectology, but not all of us know that the #lingstitute2019 instructor of the “Folk Linguistics and Language Regard” course is a master in the kitchen. Continue reading to learn more about Professor Preston’s inspiring story and the course he’s teaching this summer at Davis.

I was an early childhood Hungarian-English bilingual, although my Hungarian has deteriorated badly since I had little chance to improve it as a youth. I was also made aware as a very young teenager that the variety of American English I spoke (South Midlands) was not only not admired but even mocked by speakers from other areas. I suppose early awareness of language diversity guided me to general linguistics and language variety prejudice awareness to dialectology (and, at the time I studied, the related necessity of historical linguistics). I had the great fortune to study with the great Frederick G. Cassidy at the University of Wisconsin, founder and principal editor of the Dictionary of American Regional English; his tutelage and kindness brought me into the profession. I admit, however, that very shortly after completing my PhD, I sat up all night reading a fat paperback that arrived form the Center for Applied Linguistics —  Bill Labov’s Social Stratification of English in New York City. It let me know what I wanted to focus on in my career, and, like many others, I owe much of my professional identity to Bill and his many personal kindnesses and encouragement in the years that followed. I would be remiss to not acknowledge the opportunity Charles T. Scott, also a mentor in Madison, gave me in teaching English as a second language; it allowed me much later and with like-minded colleagues to have something to say about variationist linguistics and second language acquisition. Finally, my good friend Jacek Fisiak, former Director of the Institute of English in Poznań, Poland, allowed me to run sociolinguistically amok among his students and faculty in the early 70’s and introduced me to an enormous variety of European linguists, an opportunity that has had considerable influence on both the substance and breadth of my career.

1975, and, I say with some pride, I was instrumental in moving American Dialect Society meetings from the Modern Language Association to the LSA in the early 1980s.

I will teach a course called “Folk Linguistics and Language Regard.” This course has two main goals: First, I want to show that the study of such facts about language are not at all the “soft underbelly of linguistics” (as I dubbed them in a recent NWAV presentation) nor “linguistics light,” as a former colleague referred to them. For me they are essential parts of the study of language in speech communities, which is also for me an essential par of the study of language itself, whatever the theoretical outlook. Second, for some years now I have been trying to make a unifying case for folk linguistics, language ideology, and language attitude studies. In short, I want to do away with such subfield boundaries as the ethnography of speaking, the social psychology of language, and linguistic anthropology in the study of the perception and reception of language and have introduced the term “language regard” to cover these efforts. I will try to discuss with Institute participants the value of and means to a multifaceted approach to these matters.

I am involved in a long-term study of dialect variety status, change, and perception (or “regard”) in Oklahoma. I have been especially interested in principled ways of gleaning regard characteristics form extended respondent discourses within the framework of this effort.

I am almost ashamed to say that it is doing the linguistics I do, but, although basketball (see below, and later racquetball) are no longer pastime options, I continue to wield some skill in the kitchen (and in the selection of wines to accompany what I cook).

Professional basketball player. I grew up on the KY-IN border (on the Ohio River), where for a very long time other sports were just minor diversions.

I never tire of more of the same — the chance to meet, discuss, interact, drink, and eat with linguists, whether with my cronies from more than a few years in the profession or the newest, most enthusiastic and brightest students who have kept me delighted and on my toes over the years.

Engagement. Ask yourself if this is not just what interests and challenges you but also what attracts you to it in a way that you find impossible to resist. If it does, that engagement will serve you in all aspects of the profession. It will reveal itself in an impossible-to-fake enthusiasm that will be obvious to students and colleagues (and need I say potential employers), and it will keep you going through some bleak times.