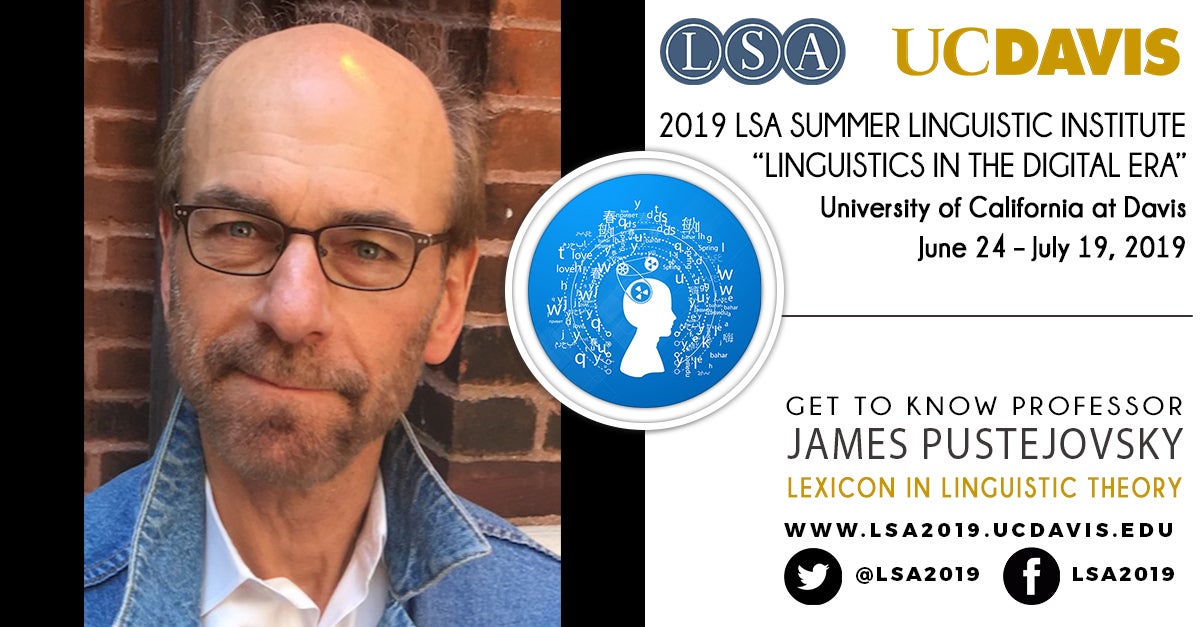 If James Pustejovsky (Brandeis University) is not working on temporal and spatial semantics, he is writing a book, beekeeping, or enjoying a scoop of Coconut Ice Cream from Cape Cod Creamery. James will teach Lexicon in Linguistic Theory with Olga Batiukova at Davis this summer. In this interview, we asked James about his early linguistic days at MIT, his #lingstitute2019 course, and his new book.

I then had a DAAD scholarship to study classical linguistics in Marburg, Germany, after which I joined the Ph.D. program in the linguistics department at UMASS Amherst, where I received my Ph.D. in theoretical linguistics, focusing on the syntax-semantics interface. That was in 1985.

I then became interested in more formal and computational approaches to semantics and “knowledge representation”, as it is known in AI. I did a postdoctoral fellow for two years at UMASS Amherst in the Computer Science department, where I started working on the semantics of tense, aspect, and events.

I then joined the faculty at Brandeis University, where I continued studying event semantics and began developing an early model of the Generative Lexicon, a distributed and richly compositional model of semantics projected from lexical information.

For the past 25 years, I have been interested in both theoretical linguistics and computational models of linguistics and language-based inference. I’ve continued working on lexical and compositional semantics, but have also specialized in temporal and spatial semantics, as well as the semantics of communicating using multiple modalities (gesture, language, gaze, action).

I have been an off and on member of LSA for 30 years, since graduate school.

The course is based on a just-released textbook from Cambridge University Press, that I wrote with my colleague Olga Batiukova. We are hoping to teach a truly comprehensive course on the role of the lexicon in linguistic theory, and the contribution of lexical knowledge to linguistic processes and computations. An important focus of the course is to point out the central role played by words in the grammar, and that the lexicon is an active process, not different from syntax or semantics.

I am working on several topics at the moment. I am interested in how languages talk about space, particularly what I call “spatial aspect”, which is how language identifies where events happen in space. I’ve developed a hybrid modal logic for modeling this. I am also working on the semantics of counterfactuals. Particularly, what I call “lexical counterfactuals”, which in fact refer to any lexical causative in language. I am interested in the formal properties of common ground in discourse and dialogue between agents using multiple modalities (speech, gesture, gaze), and developing a situated semantic model for such interactions. Finally, I am working on reconstructing visual spaces from images and linguistic descriptions of interiors. This brings together my interests in spatial semantics, dynamic updates, frames of reference, and the integration of visual information and language.

A scribe or a scuba diver.

Presenting the new book to students. This is the first time a course on the lexicon has ever been offered at the Summer Institute. I hope to get schools interested in adding the lexicon as a regular course in the curriculum within linguistics departments.

Be willing to link and connect your love of language and its structure to other disciplines, such as computer science, math, cognitive science, psychology, philosophy, sociology, and anthropology.