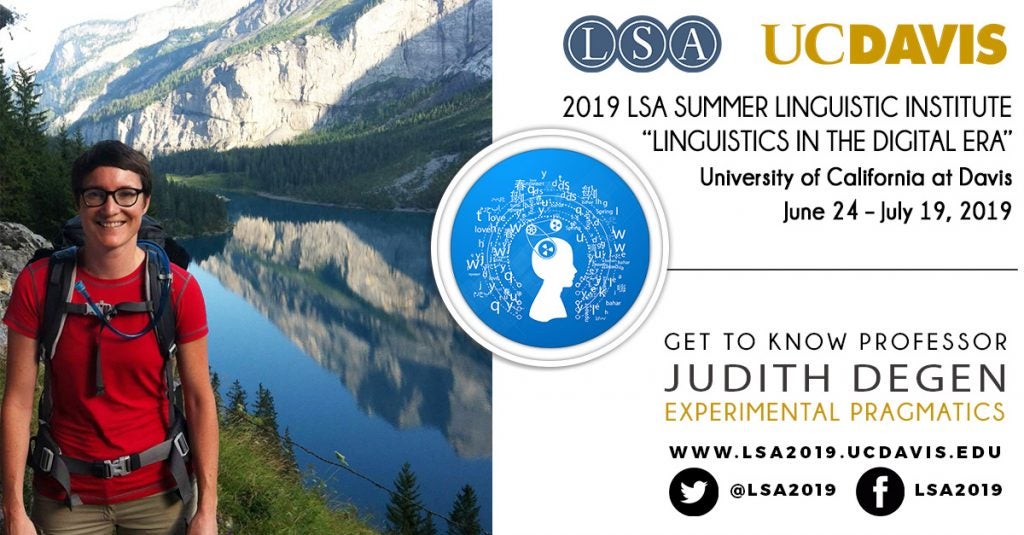 Judith Degen of Stanford University will teach the Experimental Pragmatics course at the 2019 LSA Linguistic Institute at UC Davis. Professor Degen’s class is set to bridge the methods of experimental psychology with classic issues in theoretical pragmatics. In this interview, Judith lets us in on what drew her to the study of semantics and pragmatics and why attending an LSA Institute can be “life-changing.”

I took my first linguistics class as part of my undergrad program in Cognitive Science at the University of Osnabrück in 2003. I had always been fascinated by language and was so pleased to discover one could study it formally! I was most strongly drawn to the areas devoted to meaning — semantics, pragmatics — and when my undergrad advisor Graham Katz gave me a paper by Noveck & Posada to read, about an experimental investigation of scalar implicatures, I realized that here was a set of problems complicated enough to keep me entertained for quite a while. I spent a life-changing summer attending the 2007 LSA Institute at Stanford, where I learned about applying game theory to language and using experimental methods like eye-tracking and ERPs to study how language is processed online. The eye-tracking class was taught by Mike Tanenhaus, who I began a PhD with at the University of Rochester a year later, in the summer of 2008. In 2013 I graduated with a joint degree in Brain & Cognitive Sciences and Linguistics after writing an entire dissertation on the word “some” — it turns out, it takes a dissertation’s worth of space to describe just some of the impressive context-dependence of this little word’s interpretation, online processing, and naturally occurring distribution. I then spent 4 years as a postdoc in the Psychology department at Stanford working with Noah Goodman, building and testing probabilistic models of pragmatics. In the Fall of 2017, I moved across the courtyard into the Linguistics department and started a tenure-track position, where I now happily teach and do research in (computational) psycholinguistics, still with a focus on meaning.

Hm, does one have to join the LSA to attend the Linguistic Institute? If so, the answer would be 2007.

I’ll be teaching a course on experimental pragmatics, a subfield that emerged under that label over the past two decades and combines an interest in the theoretical complexities of language use with the experimental methodologies of psycholinguistics. The course will present a broad survey of recent work in this area that has attempted to apply the methods of experimental psychology to classic issues in theoretical pragmatics. Topics we’ll cover include reference, implicature, presupposition, and speech acts.

There’s a lot of research going on in the ALPS Lab, all in the area of experimental and computational semantics/pragmatics. I’ll just mention a few here, but you can find us on the web at alpslab.stanford.edu or on Twitter at @ALPSLabStanford.

I’m currently putting the finishing touches on a paper on overinformative referring expressions which argues that we should rethink what we mean by “overinformativeness,” and shows that speakers use modifiers redundantly to soft-maximize the probability that the listener will correctly infer the intended referent. In a different project, we’re using corpus methods and web-based experiments to infer the various different uses of the word “or” as it occurs in the Switchboard corpus, in an attempt to move away from the field’s obsession with the inclusive vs. exclusive use of “or” and instead focus on the richness of the signal. In yet another project, Sebastian Schuster (a student in the lab) is experimentally investigating and modeling listener adaptation to speakers’ variable use of expressions of uncertainty like “it might rain” or “it’ll probably rain.”

We also have some more methodologically oriented work that focuses on the linking assumptions we make in experimental pragmatics. For instance, in a paper with Brandon Waldon and Masoud Jasbi (students in the lab), we show that the notion of “implicature rate,” that is near and dear to experimental pragmaticists, is highly dependent on the number of response choices participants are provided with, and how those responses are interpreted. With Ciyang Qing (a student in the lab) and my colleague Dan Lassiter, we’ve started an investigation into the extent to which a common assumption about eye movements in visual world paradigms — that proportions of looks to an object in a display reflect the participant’s degree of belief in that object being the speaker’s intended referent — is warranted.

I really enjoy anything you can do in the mountains, especially hiking and skiing.

The past few times I’ve been there, I’ve always been impressed with the exceptional quality of the food! The perks of an agricultural town.

Honestly, neither — I don’t quite get the generalized pet obsession of our generation. (I probably just lost about ten people by saying that.)

My Stockholm Syndrome compels me to say Quarters.

Do well what’s interesting to you, not what (you think) others expect you to be doing or what (others tell you) is “good for getting a job.” The field is constantly changing!