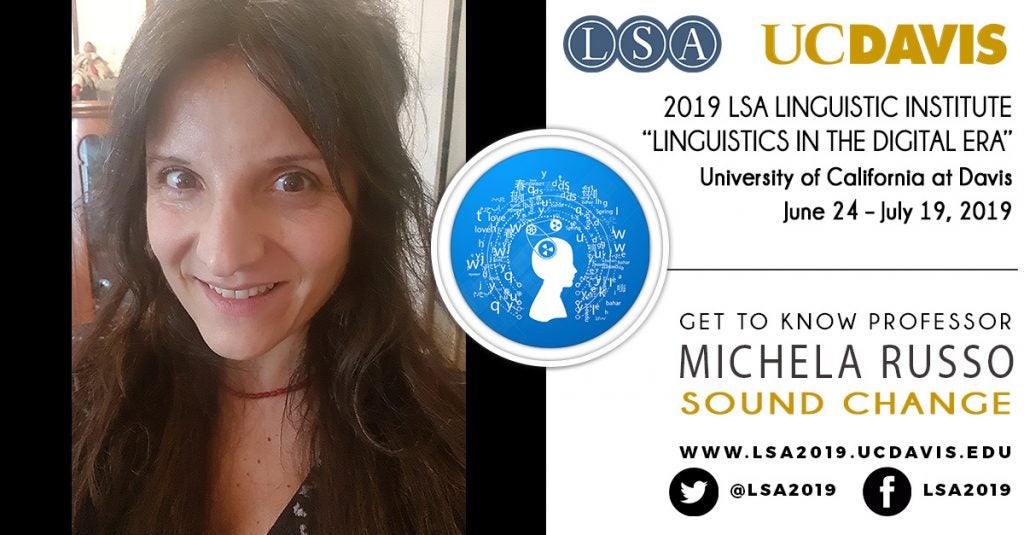 Michela Russo (University of Lyon) isn’t just passionate about phonology and sound change, she’s also a big fan of pizza and jazz! Michela will be teaching Sound Change at Davis this summer. Continue reading to learn more about Michela and her current research as well as tips she has for graduate students pursuing a career in linguistics.

After completing my PhD in Paris 2001, I was appointed as an Associate Professor (maître de conferences) in Phonology at the Linguistics department of the University Paris 8 between 2002 and 2014. Since September 2014, I am a Full Professor at the University of Lyon in Romance and Gallo-Romance Linguistics, Dialectology and Diachrony. In terms of institutions, my research is conducted within the frame of the Mixt Research Unit Formal structures of Language (SFL UMR 7023 CNRS) at the University Paris 8. Building on my initial education, my research deals with Romance linguistics, both in synchrony and diachrony, with the structure of language, its development and its manifestations, natural languages. My research activity thus combines a double orientation. On one side, my scientific work is about the diachronic aspects of linguistics, the genesis of the Romance languages, the transition from Latin to the Romance languages, and medieval Romania. On the other side, it is concerned with general and Romance Phonology and Morphology in a synchronic perspective on the Romance languages. More specifically, I addressed the issue of metaphony and diphthongization in the Romance languages, and of the nature and modeling of vowel harmony.  In my works, I highlighted the apophonization of metaphony, the role of the non-concatenativity and under-specification of elements in metaphony, especially the role of A element, which is an active apophonic morpheme in opening metaphonies. My starting hypothesis is that linearity is not axiomatic but constructional, and based on this perspective, I rethought the issue of metaphony, its consequences in Morphology, and its evolutionary link between concatenative Morphology and internal Morphology for which I proposed a formal description, in questioning the objects manipulated by linguistics. I brought into play interdigitation and a fusion modus operandi in front of concatenative and sequential Morphology. This phonological design does not establish a break between a concatenative and a non-concatenative Morphology, and between Phonology and Syntax.

I will attend my first LSA Institute and I am excited to be on board!

The course will provide an overview of Sound Change in Romance languages.  I will focus on how to look at phonological variation in diachrony and on how much Sound Change is reflected in the synchronic phonological processes of the Romance languages. My methods combine the usual practices in linguistics, i.e. ‘data sessions’, an inventory, classification and analysis of forms, with a reformulation of the derivational accounts and alternations within the frame of theoretical Phonology and modeling. In terms of theory, these means will be made available for a certain number of hypotheses currently discussed, such as the definition of the elementary units of Phonology, the re-examination of the nature and status of syllables, the relations between Phonology and Morphology, the definition of concatenativity and linearity in grammar, and the problem of linearity in Phonology and Morphology.

3. What research are you currently working on?

My works continue in the privileged field of Italian (and all its dialects) and of Gallo-Romance, which is approached through its diachrony and synchronic dialectal variation. I am mostly working on gemination, dissociation of latent consonants, the internal structure of segments, the links between enclitics and the accentuation within prosodic words. In these works, I address the central problem of latency in Phonology. I formalize a diachronic analysis of geminates coming from latent consonants in the form of syntactic doubling (Raddoppiamento Sintattico) and consonantal sandhi (liaison) in Medieval Gallo-Romance and in the synchrony and diachrony of Italo-Romance. The starting point of my reflexion is the specific derivational complexity of latent consonants, as well as the problems caused by the floating and templatic approaches concerning the form and role of syllabification. The theory that I propose goes from a derivational approach to a representational approach of segmental deficiency and a representation of linear relations in Phonology.  I reject concatenation as an autonomous structuration dimension of lexical entries. In my view, concatenation does not exist autonomously in language, as a way to link units (segments) and encode them in memory. My explanation is based on concrete facts, through a diachronic approach exploring epigraphic Latin, the first documentary writings and taking into account the issue of the phonological value of written forms. Other projects are involving me currently. I work on diachronic and synchronic Prosody; I examine the consequences of syllabic weight and consonantal complexity for the Prosody of the Romance languages. Part of my research deals with the evolution of stress since classical Latin, I focus on the issue of the accentual organization in Gallo-Romance, in Italian and its dialects in order to account for stress in Italo-Romance, early Medieval French and Occitan, as well as for the links between stress and syntactic doubling gemination in Italo-Romance.  With the same objective, I recently conducted works on Stress shift in (double) enclitic sequences in Italo-Romance, which are closer to Catalan. I show how in Italo-Romance the gemination of clitics emerges as a property of the prosodic structure that reorganizes that of Latin. I am also dealing with other diachronic issues in Romance linguistics. I always use the resources of philology by direct utilization of the graphical Latin sources available, other medieval manuscripts and cartularies. All the phenomena are studied in a diachronic and synchronic perspective and analyzed within the frame of specific models of phonological representation. I contribute to these models with my own approach and modeling, whose starting point is the questioning of concatenation. I also use the tools of instrumental phonetics and direct field work in my investigations on the synchronic state of languages.

4. What is your favorite hobby or pastime?

I love to do Modern Jazz in Paris during the winter and to swim in Naples during the summer, with Capri in front of me.

5. In a parallel universe in which you are not an academic/linguist, what would you be?

A journalist for human rights or a judge anti-Mafia.

6. What are you most looking forward to about Davis?

I am sure it will be an exciting time. I want to dedicate a lot of time to every student and encourage them to share their scientific insights and thoughts with me and with the other students. The Sound Change course will have sessions like a research process: I will begin with posing a scientific question, gathering data, testing the hypothesis.  Students must feel free to ask questions and present/share their findings.

I think it will be also great to meet the other linguists, to interact with them from a scientific point of view, but also to have fun. I will stay open for new people and experience!

– To be familiar with different theoretical models.

– To build their own data to address specific research questions.

– cognitive linguistics should not be neglected in historical and variational linguistics.

I would also like to tell students that a degree in linguistics can be of great value in the pursuit of careers not only in education. Government agencies hire linguists to supervise language programme or to carry out research on various languages, or to work in specialized fields. There are also developing fields in bilingualism, literacy, linguistic problems of ethnic minorities, and other topics in related fields where linguists are absolutely needed! A degree in linguistics is of great value in the pursuit of careers obviously also in computer languages, voice analysis research or communicative disorders, due to computer applications developments in natural language processing/understanding and in artificial intelligence.