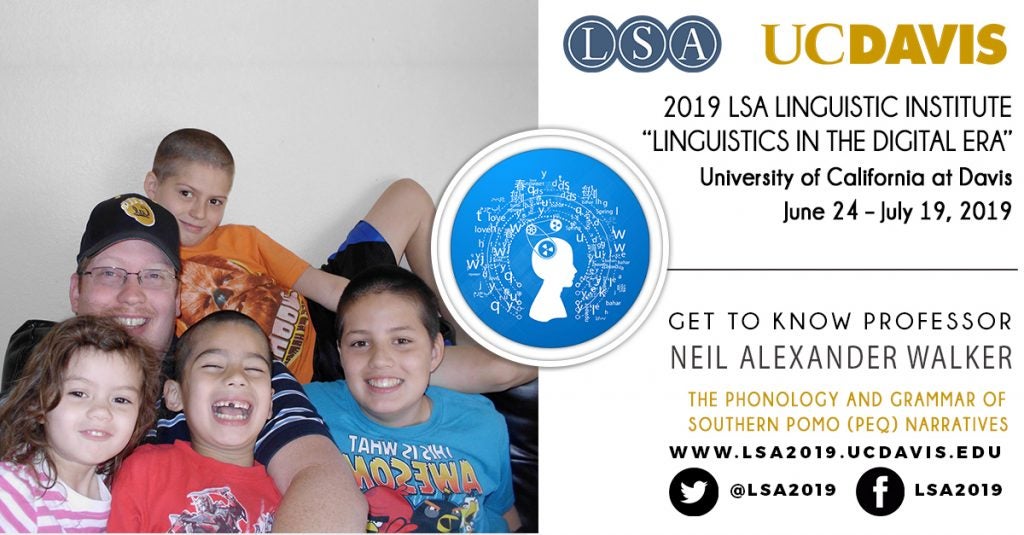 In line with the 2019 U.N. Year of Indigenous Languages, we are excited to have Neil Alexander Walker teaching the “Introduction to the Southern Pomo language” course at #lingstitute2019. In this interview, Alex talks about his close personal connection to the Southern Pomo language, how going to Davis is like going home, and about epigraphy (Indiana-Jones-style), among many others.

In 2000, my future wife invited me to her family reunion, where I met her great aunt, the last fluent speaker of Southern Pomo. A few years later I was finishing my undergraduate degree at the University of California at Berkeley, where I had entered as a prospective Southeast Asian studies major. I began to access the Survey of California and Other Indian Languages in an effort to study my wife’s great aunt’s language. Eventually, I realized I needed more linguistic training, so I switched my major to linguistics and graduated with B.A. in linguistics from Berkeley in 2004. I went on to do a Ph.D. in linguistics under Marianne Mithun at the University of California, Santa Barbara, and I wrote a grammar of Southern Pomo for my dissertation. From 2011 to 2014 I taught Southern Pomo as the Language Project Coordinator for the Dry Creek Rancheria Band of Pomo Indians. In 2015 I was awarded a DEL fellowship and began working on a grammar and dictionary of Salt Pomo (a.k.a. Northeastern Pomo), a sister language to Southern Pomo. Since 2018, I have been employed as a Research Fellow at James Cook University in Cairns, Australia. I currently work with speakers of the endangered Panim language of Madang Province, Papua New Guinea. I intend to write a grammar of Panim while at JCU. I am also continuing my work on Pomoan languages.

My course is a holistic introduction to the Southern Pomo language, an Indigenous language of California. I designed my course to be a little different than similar courses I have seen others offer: the entire course is built around a single traditional narrative collected from the Annie Burke by Abraham M. Halpern in the first half of the twentieth century. I shall be introducing everything from the phonemes of Southern Pomo to switch-reference suffixes with reference to this narrative. My goal is to provide enough instruction for the entire class to be able to read the original text in its entirety in the original Southern Pomo by the end of the course. The text is an interesting one with a clear protagonist and just the right amount of action.

I am working with Panim elders to document their language. I completed two trips to Papua New Guinea to meet with Panima speakers in 2018 and will return for five weeks between now and the beginning of the LSA Institute. I am also finishing two Pomoan projects: (1) my revised dissertation is being published as A Grammar of Southern Pomo (and I am now awaiting the first proofs); (2) I am about 50% finished with a grammar and lexicon of Northeastern Pomo, and I will be using my spare time while in Davis to meet with Northeastern Pomo elders and to research archival data at Berkeley that I cannot access from Australia.

I love nature and enjoy snorkeling and viewing tropical plants and animals.

That’s a tough one. I’d probably be involved in the life sciences or working on ancient scripts as an Indiana-Jones-style epigrapher!

I was raised not far from Davis, and so going to Davis is like going home. It will allow me to reconnect with friends and family. Most importantly, I’m looking forward to meeting many of my Pomo friends and other contacts in an effort to finish my Northeastern Pomo project during my free time in Northern California.

Whatever your preferred school of thought within linguistics, be sure to go outside your comfort zone and do some work on one of the thousands of languages which are likely to cease being spoken within this century. If you are willing to put up with the frustration, you might also consider working on a fragmented language (languages with no living speakers and some unpublished records, see http://wieldoc.org/?page_id=387 for more information).

Alex is one of the founders of a group of scholars dedicated to the documentation of endangered languages. Check out their site here to learn how to get involved.