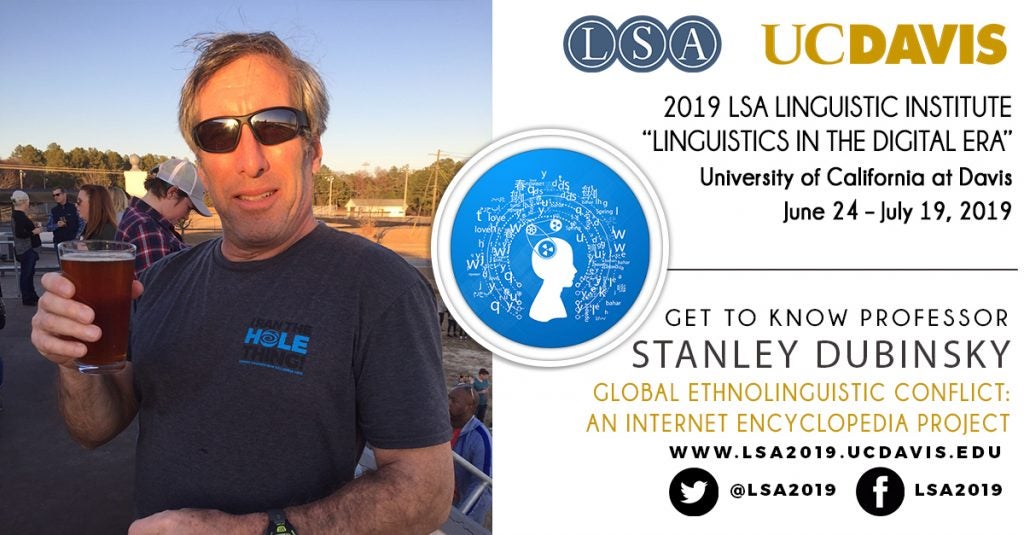 Nope, this fun interview did not come from Stanley’s book, “Understanding Language through Humor.” In fact, those whose early interests were not always in linguistics could definitely relate to Stanley’s story. Continue reading to find out more about Professor Dubinsky’s linguistic background and the course he’s co-teaching with Michael Gavin (both from University of South Carolina) called Global Ethnolinguistic Conflict: An Internet Encyclopedia Project.

Unlike some, but like many others, I have not been a linguist all my life (just most of it). Having an early high school interest in science (particle physics, specifically) and a later high school interest in poetry (aren’t they more or less the same thing?), I graduated in 1969 with an intense interest in writing. And I started college in pursuit of that dream. However, the craziness of the 1970s swept me along through Kerouacian and Bukowskian adventures (cross-country hitch-hiking, bicycle, and motorcycle trips; stints as USPS letter carrier and bicycle messenger; travel to Mexico and Israel; and more), which eventually left me with a somewhat diminished desire to devote the rest of my life to poetry.

Along the way, I managed to take a linguistics course (Brooklyn College, summer 1975) and learn Spanish (winter in Cuernavaca, Mexico). By the time I determined to continue my undergraduate career (in Jerusalem at the Hebrew University), it was all about language(s). Over the course of three years there, with summers at Universidad de Menéndez y Pelayo (Santander, Spain) and Middlebury College, and a fourth year at Taiwan National University, I had completed majors in Spanish and Latin American Literature and Chinese/East Asian Studies, and managed to also attain fluency in Hebrew.

The next stop was Cornell University, where I began studies in Chinese/East Asian Literature. After starting Japanese language and realizing that my interests were really in language and linguistics proper rather than literature generally, I moved into the Linguistics Department at Cornell, and completed a dissertation on Japanese syntax. After graduating from Cornell in 1985, I collected a half-dozen temporary stops along the way (Hebrew University, Indiana University, University of Iowa, University of California-Santa Cruz, University of Wisconsin, and Florida International University), before finally landing a tenure-track position at the University of South Carolina in 1991.

My earlier research (on the way to tenure) was pretty well focused on Japanese syntax, but this widened significantly after that, as William D. Davies and I began to take up the broader topic of Raising and Control constructions and the syntactic phenomena associated with that topic. Our books The grammar of Raising and Control: A course in syntactic argumentation (2004) and New horizons in the analysis of Control and Raising (2007) were the principle output of those years. After being promoted to Professor, I felt as though I could allow myself to pursue answers to any interesting questions that came my way and to focus on making a broader contribution to linguistics and language study. This period, which continues into the present, has led to a co-authored introduction for the general reader Understanding Language through Humor (2011) and the 2018 book with William Davies Language Conflict and Language Rights. This last book forms the foundation of an encyclopedia project, Encyclopedia of Global Ethnolinguistic Conflict, which is the topic of our institute course.

I first joined the LSA in the summer of 1982. This was at the end of my first full year as a linguistics graduate student, and at a time before I had taken up Japanese syntax and was still pursuing projects in historical Chinese phonology. My paper, “Distribution of Middle Chinese ‘entering tone’ in Modern Mandarin”, was delivered at the Annual Summer Meeting of the LSA (the last such summer meeting, held in conjunction with the 1982 LSA Linguistic Institute at the University of Maryland). To say that I was nervous before that presentation would not begin to tell the half of it.

As mentioned above, our institute course is about a project that arose out of the publication of the 2018 Cambridge University Press book, Language Conflict and Language Rights: Ethnolinguistic Perspectives on Human Conflict. Bill Davies and I discussed, before he passed in August 2017, ideas for taking the content of that book, and making it useful to others (where others do not only mean linguists). We discussed building some sort of archive, initially. After Bill passed, and I got into a discussion about the idea with an actual digital humanities scholar, Mike Gavin, it became clear to us that there was an opportunity to build something novel and completely innovative – an encyclopedia with a dynamic user-interface rather than a simple “archive”. So, the course is to be (1) an introduction to the subject matter of the Encyclopedia of Global Ethnolinguistic Conflict and its organization, and (2) a deeper examination of the methods, functions, data structure, and web interface that we’ve developed, as a model for others to consider in creating their own digital linguistic projects.

Right now, besides the encyclopedia, which is a fairly big project on its own, I am planning a second edition of Understanding Language through Humor, working with my doctoral students on syntactic and semantic analyses of Korean, and contributing to an examination of generics in English and Bulgarian.

Maybe a poet, or a hermit, or a hobbit.

A cooler and less humid summer than we would ever see in South Carolina.

Cake, unless the ice cream is lactose-free, and then the latter. Cats for us, dogs for my friends. Semester system … but only because I’m used to it.

Have a true mentor (not just a dissertation advisor). Having a career in linguistics (or any field for that matter) is about much, much more than just writing a really solid dissertation. You need to plan far ahead of that, and you will need the professional development and counseling critical to making those plans. You will also need to love what you’re about to do, because if you don’t absolutely love it, you will give up before you achieve success.